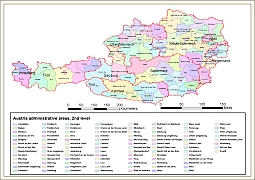 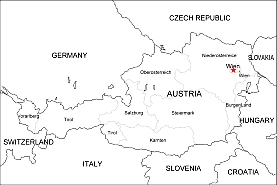 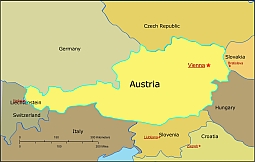 Situated at the heart of Central Europe and bordering eight different countries, Austria has historically been a political, economic, and cultural crossroads. The Brenner Pass and the Danube River have provided crucial links between  the  Mediterranean  and  Balkan  lands  to  the south and east and the Germanic countries to the north. For hundreds of years, the now small, landlocked, country  of Austria  was  at  the  center  of  the  great Habsburg Empire that ruled much of Europe until World War I.Austria’s  topography  is  dominated  by  the  Alpine mountains that extend eastward from Switzerland, covering  the western  two-thirds of  the  country. Austria’s  twoother major geographical regions are the Bohemian highlands bordering the Czech Republic to the north and the eastern lowlands, which include the Vienna Basin, home to the nation’s capital city of the same name, located on the shores of  the Danube, Europe’s second-longest river. Austria is located on the Eurasian Tectonic Plate.

Mountains More than three-fourths of Austria’s terrain is mountainous. The Alpine mountains spread across the western and southern parts of the country, with numerous ranges dividing into three major groups as they fan out across the land. The  limestone  peaks  of  the  northern Alps  begin  in Switzerland and Germany and extend west  into Austria, continuing all the way to the Vienna Woods in the east. They lie to the north of a longitudinal depression that follows the valleys of the Inn, Salzach, and Enns rivers in an eastward direction from the Arlberg Pass (5881 ft / 1792 m above sea level) and crosses the Schober Saddle to the Mur and Mürz river valleys, ending at the Semmering Pass  (3232  ft  /  985 m  above  sea  level)  and  the Vienna Basin. Many of its peaks rise above 8,000 ft (2,400 m); the highest point  in  the  range,  the Zugspitz  (9,721  ft; 2,963m), is located in Germany.

The central group of mountains is the largest and has the highest elevations, including the highest point in Austria, the Grossglockner (12,461 ft / 3,798 m). Many of its crystalline  peaks  top  10,000  ft  (3,000  m).  The  major ranges of the central Alps include the Hohe Tauern and  Niedere Tauern, and the Noric, Ötztal, Zillertal, Lechtal, and Kitzbühel Alps. The Pasterze,  the  largest of numerous glaciers found among the Austrian Alps, is also located  in  the  central  Alpine  system,  not  far  from  the Grossglockner. It provides a venue for skiers as late as mid-June. The Brenner Pass (4497 ft / 1371 m above sea level) lies in the Ötztal Alps on the border with Italy. One of the largest and the lowest passes running through the Alps, it has been an important route for north-south travel through the mountains since ancient times.

CLIMATE AND VEGETATION Temperature Austria  is  in  the  Central  European  transitional  climatic zone, and its climate varies by region. Atlantic maritime  influences  are  felt  in  the  northern  and  western provinces, where northwest winds from the North Atlantic moderate  temperatures  and  bring moisture. Annual temperatures range between 20°F to 30°F (–7°C to –1°C) in winter and 65°F to 75°F (18°C to 24°C) in summer. Continental influences are stronger in the eastern provinces, which have less precipitation and a greater range of temperatures, with colder winters, hot, humid summers, and mild, cloudy weather in the spring and fall. Average  temperatures  in Vienna are 25°F  to 34°F  (–4°C to  1°C)  in  January  and  59°F  to  77°F  (15°C  to  25°C)  inJuly. The mountain regions in the south and west have anAlpine  climate, with warm  but  short  summers  and  frequent  storms.  Winters  are  generally  long  with  clear, sunny days. On the highest mountains, summertime temperatures often remain below the freezing point. In  the  fall  and  spring,  a  warm,  dry  southern  wind called  the  föhn  moderates  temperatures  in  the  Alpine regions; it can also bring fog, and contributes to ava- lanches by causing snow  to melt suddenly and  fall  from high elevations.

NATURAL RESOURCES Austria’s most important natural resources are its forests and the potential for hydroelectric power from its numerous streams and steep mountain slopes. Strict conservation laws protect the nation’s forests, mandating replanting when trees are cut down to provide timber for paper  and  wood  pulp  production.  Important  mineral resources include lignite, iron ore, crude oil, magnesite, lead, and copper.