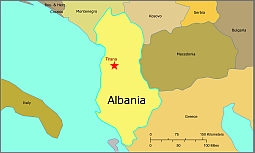 Area: 17,864 sq mi (28,748 sq km) / World Rank: 142 Location: Northern and Eastern Hemispheres. South-eastern Europe bordering the Adriatic and Ionian Seas to the west and southwest, Yugoslavia to the north, the Former Yugoslav Republic of Macedonia to the east, Greece to the southeast

Albania is one of the smallest countries in Europe. It is located on the west coast of the Balkan peninsula in southeastern  Europe  along  the  Strait  of Otranto, which connects the Adriatic and Ionian seas. More than 70 percent of Albania’s terrain is rugged and mountainous, with mountains running the length of the country from north to south. The remainder consists mostly of coastal lowlands, of which a large portion is former marshland that was reclaimed during the Communist era and is now agriculturally productive land. The largest lake in the Balkans—Lake Shkodër or Scutari—is  found  in Albania, as well as the deepest (Lake Ohrid).Albania  is  located  on  the  Eurasian  Tectonic  Plate. Shifting  of  the  earth  along  the  fault  line  that  roughly defines  the  western  edge  of  the  central  uplands  causes frequent and occasionally severe earthquakes. Major damage occurred over wide areas in 1967 and 1969.

MOUNTAINS AND HILLS Mountains Albania’s mountains, located to the north, east, and south of the coastal lowlands, can be divided into three groups.  The  northernmost  group,  the  North  Albanian Alps,  are  an  extension  of  the Dinaric Alpine  chain  and the Montenegrin  limestone plateau. Some of  the mountains in this region reach heights greater than 8,800 ft (2,700 m).  These  limestone  peaks,  popularly  known  as “the accursed mountains,” are the country’s most rugged. The central uplands region extends south along the Macedonian  border  from  the  Drin  River  valley,  which marks the southern boundary of the North Albanian Alpine area, to the southern mountains.Although the central uplands are generally lower than the North Albanian Alps, Albania’s highest peak, Mt. Korabit, is found in this region. The southern highlands are lower and more rounded than the mountains to the north. At the southernmost end of Albania,  south of Vlorë,  the mountains  reach all the way across the country, meeting the Ionian Sea.

Lakes Albania has three large tectonic lakes, which it shares with neighboring countries: Skadarsko Jezero (Lake Scutari) with Yugoslavia; Ohridsko Jezero (Lake Ohrid) with Macedonia;  and  Prespansko  Jezero  (Lake  Prespa)  with Greece. Ohridsko Jezero is the deepest lake, not only in Albania but  in  the Balkans, with a depth of 965  ft (294m)

Rivers Albania’s major rivers are the Drin, the Buenë, theMat, the Shkumbin, the Seman, and the Vijosë. They all empty into the Adriatic Sea. The Drin is the longest river in the country, while the Buenë is Albania’s only navigable river.

Oceans and Seas Albania lies on the southeastern shore of the Adriatic Sea and  is also bordered by  the Ionian Sea  to  the south. The Strait of Otranto lies between southern Albania and Italy, serving to connect the Adriatic, Ionian, and Mediterranean seas. The Coast and Beaches Albania has no good natural harbors. Albania’s Ionian coastal area is known for its great natural beauty; the area between Vlorë and Sarandë is called the “Riviera of Flowers.”

CLIMATE AND VEGETATION Temperature Albania  is  located  in  a  transition  zone  between  a coastal Mediterranean  climate  to  the west  and  a  continental climate to the east, so its climate varies. The coastal plain has mild,  rainy winters  and hot, dry  summers, moderated by sea breezes. In the mountains, continental air masses produce warm to hot summers and very cold winters with heavy snowfall; summer rainfall is also heavier in this region than on the coast. Albania’s average annual temperature is 59°F (15°C).

In  addition  to  its  forests, Albania  is  rich  in mineral resources including copper, iron, phosphates, chromium, coal, petroleum, and natural gas. The Drin River has been dammed to produce hydroelectric energy.