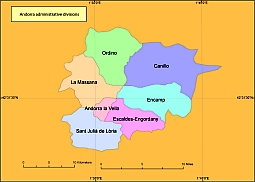 HIGH IN THE PYRENEES MOUNTAINS, on the border between France and Spain, nestles the country of Andorra. The country is nominally ruled jointly by the president of France and the bishop of Urgel in northeastern Spain. Catalan is the official language, although many people also speak French and Spanish. The country’s only large town is the capital city, Andorra la Vella.

INLAND WATERWAYS Andorra is drained by a single basin whose main river, Valira River (Riu Valira), has two branches and six smaller open basins. These basins gave the name by which  the  region was  traditionally  known,  The Valleys (Les Valls). The Valira del Norte is the northwest branch of the main river, flowing through the cities of La Mas-sana, Ordino, and El Serrat. The Valira d''Orient is the northeast branch, flowing through Les Escaldes, Encamp, Canillo, Soldeu, and Pas de la Casa.

CLIMATE AND VEGETATION Temperature Andorra has a temperate climate, but winters are severe because of the high elevation. Snow completely fills the northern valleys for several months. During the April to October rainy season, rainfall can be heavy and it is reported to exceed 44 in (122 cm) per year in the most mountainous regions.

NATURAL RESOURCES Deposits of  iron ore,  lead, alum, and building stones are among the resources exploited  in Andorra, although the economy depends  to a much greater extent on  tourism.  Andorra’s  mountainous  terrain  attracts  about  12 million tourists annually, primarily for skiing and hiking.