Each file is fully customizable with the ability to change the color, font of individual counties and states to suit your needs. New Hampshire is a state in the New England region of the northeastern United States of America.It is bounded by Quebec, Canada, to the north and northwest; Maine and the Atlantic Ocean to the east; Massachusetts to the south; and Vermont to the west. 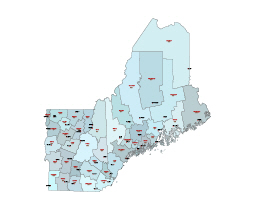 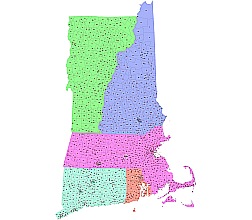 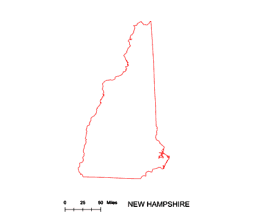 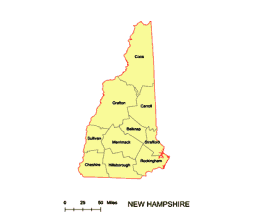 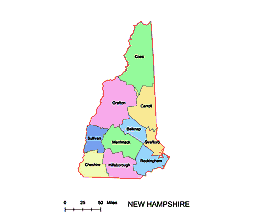 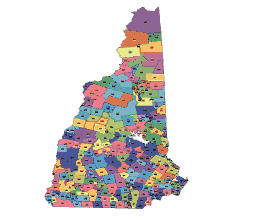 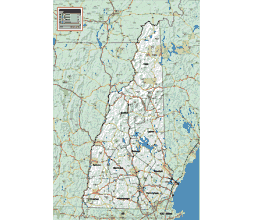 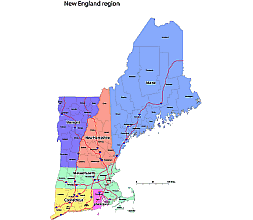 New Hampshire’s most prominent geological feature, the rudgged White Mountains, have drawn visitors for many years. Within the range rise 86 distinct peaks including Mt. Washington, 6,288-feet-tall – the highest point in northeastern North America. Glaciers once cut through the weak spots of the granite and created the most interesting aspect of the mountain: gaps, or notches. Although the White Mountain National Forest is the state’s most noteworthy recreational area, New Hampshire also has 18 miles of Atlantic Ocean beaches and is home to Lake Winnipesaukee, a major resort center.

New Hampshire’s capital city has several worthwhile attractions including the State House, the New Hampshire Historical Society, the League of New Hampshire Craftsmen, and Pierce Manse, where President Franklin Pierce lived from 1842-48. Concord is also home to the Christa MCAuliffe Planetarium, the official state memorial to the nation’s first teacher in space.

Tucked between the Franconia and Kinsman Ranges in the White Mountains, this magnificently scenic state park i sone of New Hampshire’s top tourist attractions. Its most prominent feature is the „Great Stone Face”, where the layers of granite look like an old man’s face.

Darthmouth College is home to the Baker Memorial Library, which has notable frescoes by the Mexican artist Jose Clemente Orozco, and the Hopkins Center for the Arts. See also Webster Cottage, where Daniel Webster lived during his last year as a Dartmouth College student.

At 6,288 feet, this is the highest point in New England. The Cog Railway, a scenic highway, and hiking trails reach the top where there’s a natural history museum.

The Nashua Center for the Arts is located here. Anheuser-Busch in nearby Merrimack offers tours of its brewery and Clydesdale stables.

Strawberry Banke, the original name of Portsmouth’s historic district, is a restored 10-acre historic waterfornt neighborhood.It is home to 42 buildings, dating from 1695-1950. The Portsmouth Trail is a self-guided walking tour of six historic houses. Other sights include Fort Constitution Historc Site, the Wentworth-Coolidge Mansion Historic Site and The Children’s Museum of Portsmouth.