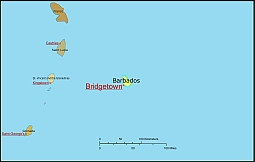 OVERVIEW
The  second-smallest  independent  country  in  the Western Hemisphere and the easternmost Caribbean Island, Barbados lies between the Caribbean Sea and the North Atlantic Ocean. It is located east of the Windward Islands and roughly 200 mi (320 km) north-northeast of Trinidad and Tobago. The low-lying island is composed of limestone and coral and almost totally ringed with undersea coral  reefs. Barbados  is  situated on  the Caribbean Tectonic Plate. Numerous inland cliffs were created by past seismic activity.

MOUNTAINS AND HILLS
Barbados is mostly flat, but a series of terraces rises from the western coast to a central ridge, culminating in the highest point, Mt. Hillaby  (1,102  ft  / 336 m),  in  the north-central part of  the  island. Hackleton’s Cliff  at  the eastern edge of the island’s central plateau rises to 1,000 ft (305 m) above sea level and extends over several miles. South and east of this elevated area is the smaller Christ Church ridge. They are separated by the St. George Valley. At one time this valley was covered by a shallow sea, with each ridge forming a separate island.

INLAND WATERWAYS
Barbados has no rivers and little surface water of any other  kind,  but  a  few  springs  are  fed  by  underground water  stored  in  limestone  beds  and  some water  courses are temporarily filled by heavy rains.

THE COAST, ISLANDS, AND THE OCEAN
The western coast of Barbados borders the Caribbean Sea, and its eastern coast borders the North Atlantic Ocean. The port city of Bridgetown is located on Barbados’s only natural harbor, Carlisle Bay, at  the southwestern end of the island. The coast is ringed by flat land and wide strips of sandy beach. At Ragged Point at the eastern
end of the island, flat rocks form a low, jagged rim to the ocean. The southern and northern ends of the island are known as South Point and North Point, respectively.

CLIMATE AND VEGETATION
Temperature
The northeasterly  trade winds  that blow across Barbados’s  eastern  coast,  which  faces  the  Atlantic  Ocean, moderate  the  island’s  tropical  maritime  Caribbean  climate.  The  weather  is  cool  and  dry  between December and May, and hotter and humid during the rainy season between June and December. Temperatures in the capital city of Bridgetown range from 70–82°F (21–28°C) in February to 73–86°F (23–30°C) in June and September.

NATURAL RESOURCES
Barbados’s most important natural resource is sugarcane; the sugarcane industry was the island’s most important  economic  sector  until  the  1960s,  when  it  was surpassed by  tourism. Barbados also has modest natural gas  and  petroleum  resources  and  supports  a  fishing industry.