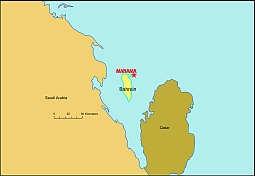 OVERVIEW
Bahrain’s  six  inhabited  islands—Bahrain, Al Muharraq, Sitrah, Umm an-Na''san, Nabih Salih, and Jidda—and their position  in an  inlet of  the Persian Gulf have given this multi-island nation a regional importance as a trade and transportation center. The low rolling hills, rocky cliffs, and wadis comprise the majority of this barren land, although along the north coast of the island of Bahrain is a narrow strip of land that is irrigated by natural springs and artesian wells. Most of the lesser islands are flat and sandy, although date groves cover the island of Nabih Salih. Bahrain also possesses the Hawar Islands, off the coast of Qatar.

THE COAST, ISLANDS, AND THE OCEAN
Oceans and Seas
Located in an inlet of the Persian Gulf, the Gulf of Bahrain, the island of Bahrain is connected to other major islands by bridges, and to Saudi Arabia by the King Fahd Causeway.
Major Islands
The country  is comprised of 33  islands,  the 6 major islands being: Bahrain, the largest; Al Muharraq; Sitrah; Umm  an-Na''san;  Nabih  Salih;  and  Jidda.  In  2001  the International Court of Justice awarded the Hawar Islands, long  disputed  with  Qatar,  to  Bahrain.  The  remaining islands are little more than exposed rock and sandbar.
The Coast and Beaches
Unfortunately, coastal degradation (damage to coral reefs  and  sea  vegetation)  resulting  from  oil  spills  and other  discharges  from  large  tankers,  oil  refineries,  and distribution  stations  has  adversely  affected  Bahrain’s coastline and beaches.

CLIMATE AND VEGETATION
Temperature
Summers are very hot and humid with southwest winds raising dust storms and drought conditions. Winters are mild, cool, and pleasant. Average temperatures in July range from 84°F (29°C) to 79°F (37°C)| and in January from 68°F (20°C) to 57°F (14°C).
Rainfall
Prevailing southwest winds that sweep this low-lying desert plain contribute to dust storms and occasional drought. Rainfall averages less than 4 in (10 cm) annually and occurs primarily from December to March.
Deserts
Due to its location and weather patterns, the State of Bahrain is primarily desert, with only a narrow strip of land on the main island that is irrigated by natural springs and artesian wells.

NATURAL RESOURCES
Bahrain depends on the exploitation of oil, natural gas, fish, and pearls to support its economy. There is little arable land and no forests.