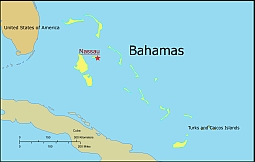 OVERVIEW
The  Commonwealth  of  the  Bahamas  occupies  an archipelago that lies across the Tropic of Cancer at the northwestern end of the West Indies, about 50 mi (80 km) off the southeast coast of Florida. Roughly 700 islands  are  included  in  the  chain,  as well  as  some 2,000 rock formations, islets, and cays (keys). Nassau, the capital, is located on New Providence, which occupies a central position in the archipelago and is the most densely populated  island. Collectively,  the  rest  of  the  inhabited Bahamas islands are known as the Family Islands. The islands, most of which are long, narrow, and fringed by coral reefs, originated as surface outcroppings of two submerged limestone banks, today known as the Great Bahama Bank and the Little Bahama Bank. The Bahamas lie on the North American Tectonic Plate, and the nation exercises maritime claims over the continental shelf to a depth of 656 ft (200 m).

MOUNTAINS AND HILLS
The terrain of the Bahamas is mostly flat and low, only a few feet above sea level in most places. There are no true mountains, and only a few hills. The tallest point is Mt. Alvernia on Cat Island (206 ft / 63 m).

None of the Bahamas are large enough to support sig- nificant rivers or lakes, although there are many smallstreams  and  ponds.  Coastal  wetlands  and  mangrove swamps are common throughout the archipelago.

Oceans and SeasThe Bahamas  are  spread  over  approximately  90,000 sq mi (233,000 sq km) of water in the southwestern por- tion of the North Atlantic Ocean. They are separated from Florida in the United States by the Straits of Florida. The Mayaguana Passage and the Caicos Passage, respectively north and south of the island of Mayaguana, allow clear sailing from east to west through the chain. A relatively large area of open water in the middle of the archipelago is known as Exuma Sound.

The Coast and Beaches
The  numerous  coral  reefs  on  the  shorelines  of  the Bahamas  combine  with  iron  compounds  found  in  the limestone terrain to produce rare and beautiful colors in the shallow seas surrounding the islands. This, as well as the many coral reefs to be found throughout the archipelago, make  the Bahamas a popular destination  for beach lovers and divers

CLIMATE AND VEGETATION
Temperature
The Bahamas have a subtropical marine climate moderated by warm breezes from the Gulf Stream and the  Atlantic  Ocean.  Average  temperatures  are  73°F (23°C)  in winter  (December–April)  and  81°F  (27°C)  in summer (May–November).
Rainfall
Rainfall averages 50 in (127 cm) annually, with some variation among  the different  islands. Occasional hurricanes occur between mid-July and mid-November. Hurricanes  can  cause  major  damage  from  winds  and flooding, but their effects are limited since the islands are so widely scattered, with a reduced incidence of risk for any one island.

NATURAL RESOURCES
Commercially  significant minerals  include  salt,  aragonite, and limestone. Other natural resources include fish from the surrounding water, and modest amounts of timber and arable land. However, the Bahamas’ economy relies more heavily on tourism than it does these resources.