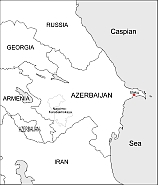 OVERVIEW
Azerbaijan is the easternmost country of Transcaucasia (the southern portion of the region of Caucasia). It lies within the southern part of the isthmus between the Black and Caspian seas. The country is bordered on the north by Russia, on the east by the Caspian Sea, on the south by Iran, on the west by Armenia, and on the north- west by Georgia. An  exclave  called Naxçivan  lies  to  the west, separated from the rest of Azerbaijan by Armenia. Naxçivan borders on  Iran and Turkey  in  the west. Control  of  the  Nagorno-Karabakh  region,  located  within Azerbaijan’s  borders,  east  of  Armenia,  is  disputed  with that country. About half of Azerbaijan is covered by mountain ranges;  these mountains  run along most of  the borders, surrounding  the  Kura-Aras  lowlands  on  three  sides. These lowlands are an essentially flat region, much of which is below sea level. The coastline along the Caspian Sea is also essentially flat. The rise in elevation, from low lands to highlands, occurs over a relatively small area. The climate is varied for an area of only 33,400 sq mi (86,600 sq km): in the center and east are dry, semiarid steppe; in the southeast, it is subtropical; high mountain elevations  to north  are  cold;  and  along  the Caspian  Sea coast, weather is temperate.

INLAND WATERWAYS
Lakes
The Mingäçevir Reservoir, a 234  sq mi  (605  sq km) reservoir  formed  by  a  dam  built  in  1953  on  the  Kura River, is the largest body of water in Azerbaijan. Rivers and Canals Most of the country’s rivers flow down from the Caucasus  ranges  into  the  central  Kura-Aras  lowlands.  The Kura River flows through Turkey, Georgia, and Azerbaijan; and at 940 mi (1500 km) it  is the longest river of the Transcaucasia Region. The lower 300 mi (480 km) in Azerbaijan is navigable. It enters the Caspian Sea in a delta south of Baku. The Araks (Aras) River, which is 568 mi (914 km)  long,  flows along much of  the border with Iran before joining the Kura River in south-central Azerbaijan. The Kura-Aras lowlands west of the Caspian shoreline form an area of alluvial flatlands and low seacoast deltas. However, much of the time water here is supplied through  irrigation;  the area  is naturally arid. The Upper Karabakh  Canal  channels  water  from  the  Mingäçevir Reservoir in northwestern Azerbaijan to the Kura and Araks further south, bringing water to farms in the central lowland during the dry summer months. In the east, the  Samur-Abs ¸eron  Canal  redirects  water  from  the Samur River on Azerbaijan’s northeastern border  to  the Abs ¸eron Peninsula, an arid area near the capital, Baku.

THE COAST, ISLANDS, AND THE OCEAN
The Caspian Sea
Azerbaijan  has  a  500 mi  (800  km)  coastline  on  the Caspian Sea, which is essentially a giant saltwater lake in southeastern Europe and southwestern Asia. With an area  of  143,000  sq mi  (371,000  sq  km)  it  is  the  largest inland body of water in the world. It has no outlet to the ocean. Baku is Azerbaijan’s chief port on the Caspian.

The Coast and Beaches
The irregular Caspian coastline features the Abseron Peninsula in the center of Azerbaijan’s coast. Pollution from  agricultural  chemicals  (especially  pesticides), industry, and oil drilling has had a serious impact on the Caspian Sea coastline environment.

CLIMATE AND VEGETATION
Temperature
Climate  varies  from  subtropical  and  humid  in  the southeast to subtropical and dry in central and eastern Azerbaijan. Along the shores of the Caspian Sea it is temperate, while  the higher mountain  elevations  are generally cold. Baku, on the Caspian, enjoys mild weather that averages 39°F (4°C) in January and 77°F (25°C) in July. Rainfall Most of Azerbaijan receives little rainfall, only 6 to 10 inches (152 to 254 millimeters) annually on average. As a result, agricultural areas require irrigation. Approximately 3,861 sq mi (10,000 sq km) of the land is irrigated (1993 est.). The greatest precipitation falls in the highest elevations of the Caucasus but also in the Länkäran Lowlands of the extreme southeast. The yearly average in these areas can exceed 39 inches (1,000 millimeters). Kura-Aras Lowlands The Kura-Aras  lowlands occupy  the  center of Azerbaijan,  between  the  mountain  ranges  and  the  Caspian Sea. Much of this area is below true sea level, as are the shores of the Caspian.Only 18 percent of the land is considered arable, with permanent crops comprising 5 percent of the total.

CLIMATE AND VEGETATION
Temperature
Climate  varies  from  subtropical  and  humid  in  the southeast to subtropical and dry in central and eastern Azerbaijan. Along the shores of the Caspian Sea it is temperate, while  the higher mountain  elevations  are generally cold. Baku, on the Caspian, enjoys mild weather that averages 39°F (4°C) in January and 77°F (25°C) in July.

NATURAL RESOURCES
Crude oil and natural gas are  the most  important of Azerbaijan’s natural  resources. The oil  fields  are  located offshore  near  the  Abs ¸eron Peninsula, beneath the Caspian  Sea.  Iron  ore,  aluminum,  copper,  lead,  zinc,  limestone, and salt are the most abundant mineral resources. Despite decades of severe air, water, and soil pollution, highly productive Caspian fisheries provide valuable catches of  sturgeon  (for  caviar),  salmon, perch, herring, and carp.