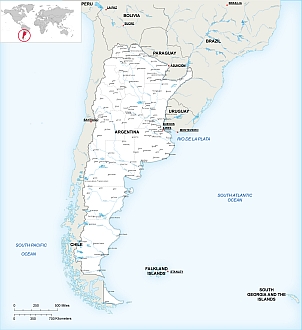 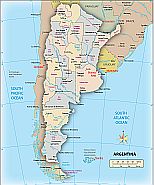 Location: Southern and Western Hemispheres, in the southern region of the South American continent;

bordered by Bolivia and Paraguay on the north; Brazil, Uruguay, and the South Atlantic Ocean on the east; and Chile on the south and west.

Capital City: Buenos Aires, on the northernmost point of the Atlantic coast

The region of Patagonia takes it name from the word pantagon, “big feet.” This name referred to the Tehuelche Indians who first entered the fertile plains wearing oversized boots.

Argentina is the eighth largest country in the world. The terrain varies dramatically across the country’s different regions, as both altitude and latitude play a major role in Argentina’s geography. The country’s four major physiographic provinces are the Andean region, the lowland North, the central Pampas, and Patagonia. Patagonia includes Tierra del Fuego, the southernmost point of the South American continent, shared by Argentina and Chile.

The Andean region makes up 30 percent of Argentina. Home to the Western Hemisphere’s highest point, Cerro Aconcagua, the Andes Mountains are broad and lofty in the north, and narrower and progressively lower in the south. This area also contains half of the Lake District (the other half is in Chile)

The Atlantic Ocean comprises Argentina’s eastern border. Argentina has one of the largest ports on the Atlantic Ocean in Buenos Aires. The area of the South Atlantic around the Valdés Peninsula is home to one of the world’s largest concentrations of the Atlantic Right Whale (Eubalaena glacialis). The Argentine coast is also known for being home to the Magellanic Penguins.

Argentina shares the offshore island territory of Tierra del Fuego with Chile, and also owns Isla de los Estados, separated from Tierra del Fuego by the Strait of Le Maire. Argentina claims the Falkland Islands (Islas Malvinas), a large archipelago to the southeast of the country that is under the control of the United Kingdom.