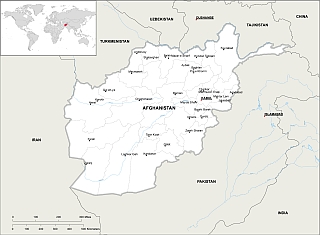 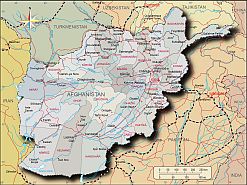 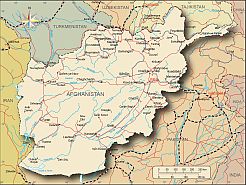 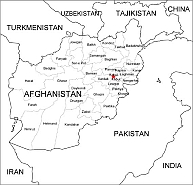 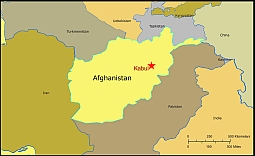 OVERVIEW
Afghanistan is a landlocked nation in south-central Asia. Strategically located at the crossroads of major north-south and east-west trade routes, it has attracted a succession of invaders ranging from Alexander the Great, in the fourth century B.C to the Soviet Union in the twentieth century A.D. Almost as large as the state of Texas, Afghanistan is bounded by six different countries. Afghanistan’s longest  border—accounting  for  its  entire  southern  boundary and most of  its eastern one—is with Pakistan. The shortest one, bordering China’s Xinjiang province,  is  a mere 47 mi (76 km) at the end of the Vakhan corridor, a narrow sliver of land 150 mi (241 km) long that extends eastward  between  Tajikistan  and  Pakistan. At  its  narrowest point it is only 7 mi (11 km) wide.The Hindu Kush mountains, running northeast to southwest across the country, divide it into three major regions: 1)  the Central Highlands, which  form part of the Himalayan Mountains and account for roughly twothirds  of  the  country’s  area;  2)  the  Southwestern  Plateau, which accounts for one-fourth of the land; and 3) the  smaller  Northern  Plains  area,  which  contains  the country’s most fertile soil.

INLAND WATERWAYS
Lakes
There are  few  lakes  in Afghanistan. The major ones are Lake Puzak and Lake Saberj (Lake Helmand), situated on the southwestern border. Lake Saberj has most of its surface area in Iran. Lake Zorkul is located in the Vakhan corridor near the border with Tajikistan. Abi-Istada, situated  on  a  plateau  about  120 mi  (193  km) northeast  of Qandahar, is a salt lake. The Band-e Amir is a group of five small lakes in the Central Highlands that owe their unique coloration—ranging from a filmy white to a deep green—to the bedrock beneath them. Rivers Afghanistan’s drainage system is essentially land-locked. Most of the rivers and streams end in shallow
desert  lakes  or  oases  inside  or  outside  the  country’s boundaries. Nearly half of the country’s total area is drained by watercourses south of the Hindu Kush–Safid ridge line, and half of this area is drained by the Helmand and its tributaries alone. The Amu Dar''ya on the northern border, the country’s other major river, has the next-
largest drainage area.

THE COAST, ISLANDS, AND THE OCEAN
Afghanistan is landlocked, with the closest seacoast roughly 300 mi (483 km) away in Pakistan, on the shores of the Arabian Sea.

CLIMATE AND VEGETATION
Temperature
Afghanistan has a semiarid to arid climate with wide variations  in  temperature,  both  between  seasons  and between different times of day. Its summers are hot and dry, but its winters are bitterly cold. Recorded temperatures have ranged as high as 128°F (53°C) in the deserts, and  as  low  as  -15°F  (-26°C)  in  the  central highlands, which have a subarctic climate. Summertime temperatures in the capital city of Kabul can vary from 61°F (16°C) at sunrise to 100°F (38°C) by noon. The mean January temperature in Kabul is 32°F (0°C).

Rainfall
In much of the country, rainfall is sparse and irregular, averaging 10 to 12 in (25 to 30 cm) and mostly falling between October and April. However, a record 53 in (135 cm) annually has been recorded in the Hindu Kush mountains, and rainfall is generally heavier in the eastern part of the country than in the west. Indian summer
monsoons can bring heavy rains in the southeastern mountains  in  July and August. Otherwise, Afghan summers are generally dry, cloudless, and hot. Humid air from the Persian Gulf sometimes produces summer showers and thunderstorms in the southwest.